On 06 January BIDV hosted an online business implementation conference in Hanoi, setting new targets for the path ahead.

Given the general context of the economy, the BIDV system rendered great efforts to overcome difficulties, ensuring business continuity, fulfilling its business plan targets, contributing positively to the state budget, and ensuring the interests of shareholders and employees. The bank also effectively performed its responsibilities to the community, proactively reducing its income in order to share the burden with individuals and businesses across the country affected by natural disasters and the Covid-19 pandemic. 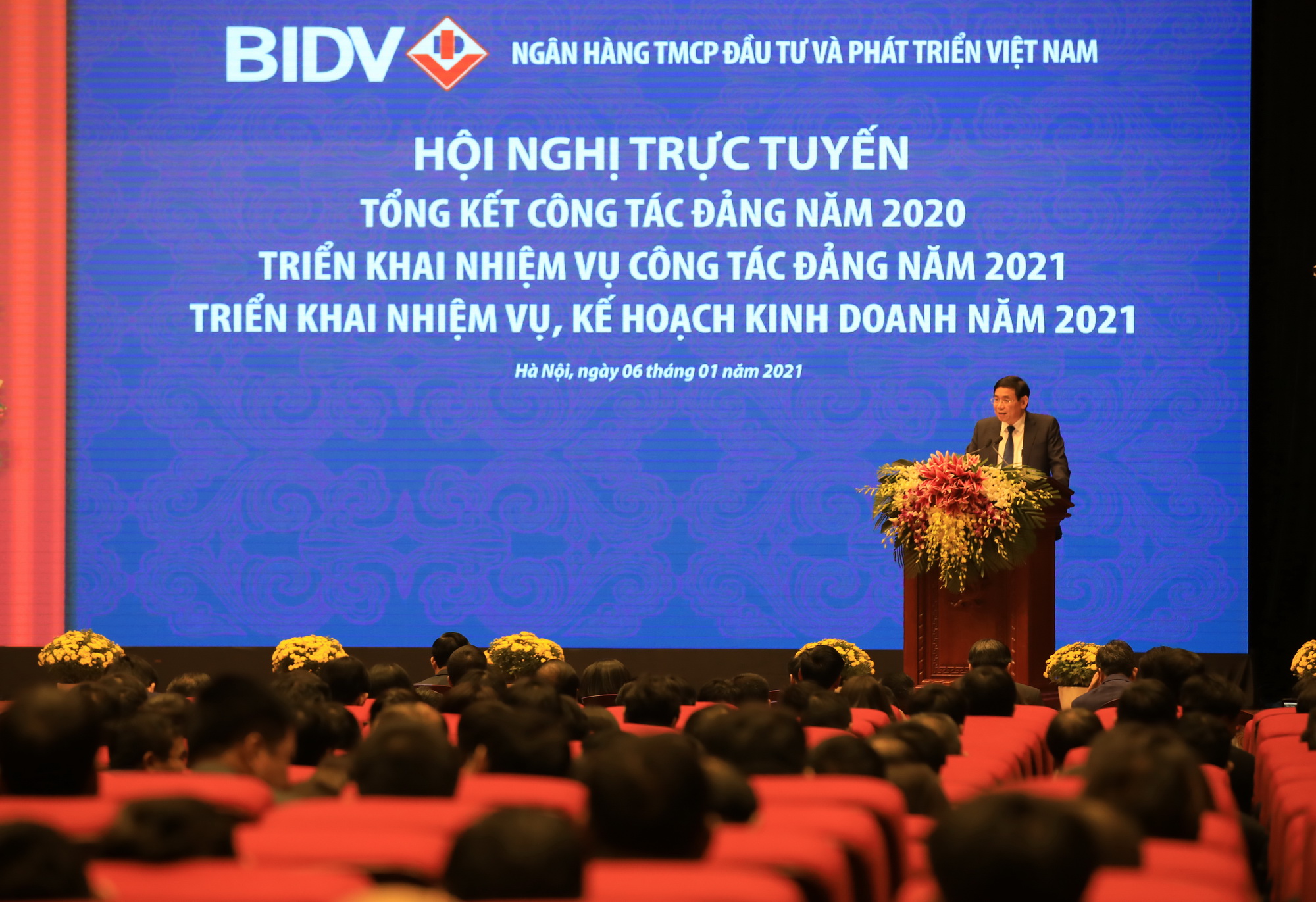 Mr. Phan Duc Tu, chairman of BIDV's Board of Directors speaks at the business conference

Total outstanding credit and investment reached VND1.43 quadrillion (USD61.8 billion), up 9 percent compared to 2019; in which outstanding loans reached VND1.19 quadrillion (USD51.4 billion), 1.92 times higher than 2016, and up 8.8 percent compared to 2019 in compliance with the credit limit assigned by the State Bank, and accounting for 13.5 percent of the share of credit of the whole sector.

The pre-tax profit of the banking business alone only reached VND8,515billion (USD368 million) and consolidated profits reached VND9,017 billion (USD390 million), exceeding the financial plan assigned by the State Bank. However this figure was still lower than that of 2019 due to BIDV’s proactive income reduction by more than VND6,400 billion (USD276.5 million) for restructuring debt, lowering interest rates and reducing interest and fees to support businesses and people according to the direction of the State Bank.

BIDV paid nearly VND6,200 billion (USD268 million) to the State budget over the year with the cumulative amount paid to the state budget over the past five years reaching VND27,900 billion (USD1.2 billion) – making it stand among the largest taxpayers in Vietnam. Currently BIDV's charter capital is VND40,220 billion (USD1.74 billion) , 20 percent higher than in 2016, making the bank the largest commercial bank by charter capital in Vietnam. Operational safety indicators are always ensured according to the State's regulations, and are close to meeting the standard of international practice.

BOLSTERING A KEY ROLE IN LEADING THE MARKET

Addressing BIDV’s business conference, Mr. Nguyen Kim Anh, deputy governor of the State Bank of Vietnam, acknowledged and spoke highly of the achievements BIDV made in 2020. The deputy governor said that the overall success of the banking industry was attributed to the solidarity and efforts of all credit institutions, in particular the BIDV system. As one of the country’s four state-owned commercial banks, BIDV has well-performed its key role in leading the market in accordance with the direction of the government and the State Bank.

According to the deputy governor, despite being affected by the Covid-19 pandemic, BIDV had completed and exceeded all the business targets assigned at the General Meeting of Shareholders and by the State Bank of Vietnam. BIDV met most of the objectives outlined in the restructuring plan in association with the handling of bad debt as approved by the State Bank. In addition, BIDV successfully managed the quality of growth, reduced costs and reduced lending rates as well as offering the lowest lending rates in the market in order to support businesses and people.

“BIDV has actively transformed its business model from dependence on credit activities to a modern, multi-service business; concentrating resources and finance on accelerating digital transformation of operations with breakthrough growth in the number of digital banking services and transactions, helping the bank save operating costs and human resources at branches. The bank also actively implemented payment for public services, especially electronic toll collection,” emphasised the deputy governor.

The deputy governor expressed his belief that, with the results achieved in recent years and the efforts and determination of the Board of Directors, the Board of Management and all employees, BIDV will complete and exceed its business plan for 2021, continuing to maintain its role and position as one of the leading banks in Vietnam’s credit institution system. 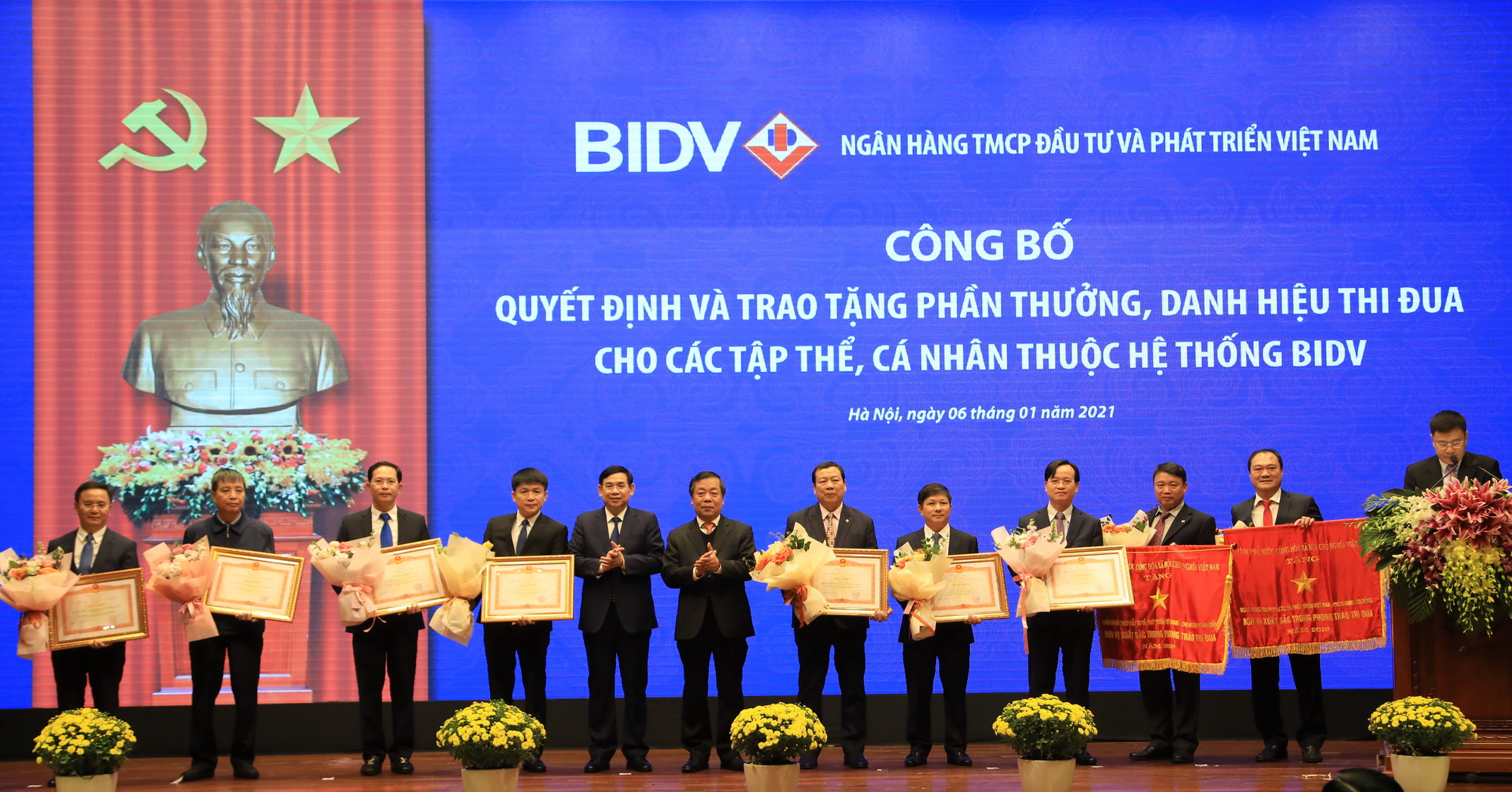 With the 2021 motto of action “Discipline - Quality - Digital Transformation”, BIDV is set to successfully implement its business plans for 2021 – the first year of implementing the strategy to 2025, with a vision to 2030. Specifically, total assets will grow by about 9 percent; credit growth is set to increase by about 12 percent in compliance with the limit assigned by the State Bank, customer deposits will grow by 12-14.8 percent and the NPL ratio will remain below 1.6 percent.

Bank for Investment and Development of Vietnam JSC